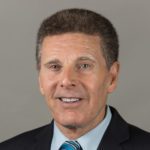 Dr. Adams served in public education leadership roles for 43 years of which 36 were as Superintendent of Schools in the same New Jersey district. Under Adams’ leadership, the schools, and programs he administered were recognized for academic excellence and for outstanding student achievement. One such program received the NSBA Magna award. This program provided the opportunity for students to earn an Associate Degree concurrent with a high school diploma. Another program titled “Project A.D.V.A.N.C.E.” – an alternative program for emotionally challenged students – was nationally validated and exported to 22 states and Canada. The U.S. Secretary of Education Award for Excellence was received for a computer application program initiated under his leadership.

Adams was included on the NSBA Executive Educator Top 100 School Administrators in North America list. He received the AASA James R. Kirkpatrick Legislative Award and the Rutgers University Graduate School of Education Distinguished Alumni Award. He is an NJASA past president and state superintendent of the year. Adams has served in numerous AASA leadership roles including two non-consecutive three-year terms as an elected member of the executive committee. Additionally, throughout his career Bill has been instrumental in corporate partnerships assisting with business development, the educational marketplace, and introductions. Strategic planning is also an area of expertise. He has facilitated multiple strategic plans with districts throughout the east coast. During Dr. Adams’ tenure as superintendent, eight superintendents, and assistant commissioner, and a college president were yielded from his leadership teams. Both of his sons are in educational leadership positions.